In 1905, Lord Curzon reached Kuari Pass (4652 m). Kuaripass means “door way”. He made the trek, and since then it is also known as the Curzon trail. The main attraction of it is the imposing view of the eastern peaks of Garhwal Himalayas, the twin peaks of Nanda Devi, Kamet, Dronagiri, Trishul, Bertholi, Hathi Ghodi Parvat, Mana, and Neelkanth peaks. The trek passes through Pristine Rhododendron, oak and deodar forest. Rarely Himalayan flora and fauna are found as plenty as on this trail. The Kuari (virgin) Pass treks is a highly varied & scenic trek which passes through three lesser Passes & five major rivers – the Pinder, Kaliganga, Nandakini, Birehiganga & Dhauli Ganga. The pass or “KHAL” is approached from the ancient trek (Goat Track) route to Joshimath, Badrinath along the pilgrim’s route. This trek can be undertaken from Auli or from Debal or Ghat near Nandprayag.

Changabang (6864m) , Ronthi , Bithartoli, Kamet (7757m) and others. On a clear day most of the time you are trekking in the company of these mountains giving you a thrilling experience of the mighty Himalaya, particularly the Nanda Devi Massif. These mountains though far away appear very close. The trail was named after Lord Curzon, who was a keen trekker & it is said that the path was specially improved so that he could trek. With independence it was renamed the Nehru Trail.

In the morning take an AC train for Haridwar by 06:55 hrs. Arrival at Haridwar by 11:25 hrs and then drive to Rishikesh by car. Check in to hotel. Evening explore the religious town of Rishikesh, which is considered as town of saints and Sadhus. There are several ashrams and temples that add to a distinctive flavor of the town, The Ganges aarti at ashrams is really worth it. Overnight in the hotel.

After an early breakfast drive to Ghat via Devprayag, Rudraprayag, Karnprayag and Nandprayag, the most famous confluences of Garhwal Himalayas. Ghat is a huge village with more than a couple of schools, government offices and more or less happening market for the
nearby villages. Overnight in the tent.

It’s time to board typical Himalayan village jeeps which will take you to Selu Bagar, a small center with a handful of shacks serving as village shops and is our starting point for the trek. This drive is of 7 km and will take around 30 minutes. You meet our ponies/porters at this point. The trail from here is well distinctive with continuous switch backs winds to the ridge from where you can see settlements of Ramni and Ghunni villages. From here its walk through the village full of colors of Himalayan inhabitants makes hike more entertaining.
After passing through couple of cluster settlements the trail takes you go past the village to an open plateau above Ghunni which is our campsite for the day. Overnight in the tents.

The day requires an essential early start not only to negotiate the long days but also to acquaint beautiful Himalayan views. The trails winds up to the ridge top towering high above the campsite at Ghunni. After crossing the ridge you will come to an open meadow with stunning views of some of the Himalayan jewels i.e. Nanda Ghunti, Chaukhamba and an awesome view of Ramni and Ghunni settlements just lower down the valley. From here the trail continues to climb gently, passing through beautiful forests of Rhododendron, followed by pasture grasslands for sheeps and cattles with some nomadic huts. The trail from this point climbs with a couple of switch backs which again becomes gentle and takes you to an open meadow with gorgeous views of Nanda Ghunti peak. Continue with the trail which is more or less gradual finally takes you to Vinayak Pass. The pass is marked with a Ganesha temple with a prayer flag. From here you will get to see some excellent view of Himalayas and first glimpse of Kuari pass at a distant. From the pass the trail starts to drop down gently and in point in times becomes steep, which continues to drop passing through Sem Kharak and finally takes you to the village of Jhinjhi. Overnight in the tents.

The day’s walk starts with an aroma of living style and culture of people of Jhinjhi village. The trail continues to descend through the village finally comes to the valley floor and brings you to a high suspension bridge over river Birahi Ganga. After crossing the bridge you get to the true right of the valley. The trail now climbs steeply with zig zags initially and later with some false summits finally to the ridge. Again some compensating views of the nearby settlements and some Himalayan peaks are really appreciable. From this point path is gradual and passes through a beautiful forest of Rhododendron finally go past Kaliagad to the settlement at Pana. A final ascend of less than a kilometer will bring us to the campsite above village of Pana. Overnight in the tents.

The trail is well distinctive above the camp site passing through a forest of Rhododendron with a couple of fall summit and finally takes you to the ridge. Now trail continues gradually through the forest to an open meadow of Sartoli which serve as camping site as well as pasture land for a sheep & cattle. This is an ideal place to view Kuari Pass dominating the horizon. Initially the trail from Sartoli starts to descend gradually for a couple of kilometers but in the later part the final descend to the side stream is very steep with loose moraine (The guest are required to use their trekking poles during this stretch). Cross over the side stream and start a steep ascend with a series of switch backs to the ridge top. From here trail traverses slightly with a couple of ascend again and finally takes you to another side stream just under Dhakwani. From this point it’s about a half an hour climb to the campsite at Dhakwani. A cup of tea with cherishing flavor is worth it. Overnight in the tents.

This day requires an early start in order to get a magnificent view at the pass. The trail from Dhakwani continues to climb through the forest until we cross the tree line. From this point the path traverses to the left of the valley just under the pass and continues with a series of switch backs straight to the pass. Oh what a fabulous, stunning, magnificent views of greater Himalaya is waiting to be admired. Take your time, relax and enjoy photography at the pass. The trail from the pass slightly ascends to a hump. From where you will find an excellent view of Dronagiri peak. After this the trail descends to a point with a bifurcation to Tapovan & Tali. Continue on the trail to Tali which leads to a ridge with temple and prayer flags. From here the Great Nanda Devi peak comes in view. The trail goes past through pasture land and enters the forest and finally leads to the campsite at Tali. Overnight in The tents.

This morning is the morning at ease. The trail from Tali is a gradual climb across mountain ridge. This trail is narrow and requires cautious walking until it reaches Gorson meadows. From here it’s all Himalayas all around. Great Nanda Devi peak is utmost admirable and dominating amongst the many. The crossing of Gorson meadow is real fun and most enjoyable walk. Finally the man made concrete contractions could be seen from a distant marks the village of Auli. It’s time to say bye to the ponies and porters. Board a Jeep to town of Joshimath which is 13 kms drive. Joshimath is a happening market place and serves as a supply to nearby villages. Overnight in the hotel.

Early morning drive to Rishikesh. On the way visit Rudraprayag where river Mandakini and Alaknanda meet. Lunch enroute. Arrive Rishikesh by evening. Check into the hotel for dinner and overnight stay.

In the morning transfer to Haridwar and from here catch an AC train for Delhi. Arrival at Delhi by afternoon. Trip & Services Ends Here

1. Trekking boots - well broken in and waterproofed
2. Down jacket or equivalent with hood
3. One heavy wool shirt or sweater
4. Two cotton shirts
5. One pair cotton trousers or shorts
6. One pair woolen trousers
7. One pair shorts or calf-length skirt for women
8. Three pairs of regular underwear
9. Long underwear - thermal or wool
10.Wind- and rain-gear with hood
11. Sun hat with brim
12.Woolen hat or balaclava
13.Woolen gloves
14.Woolen socks to wear with boots
15.Cotton socks
16. Personal first-aid kit including medication for common ailments
17. Flashlight with extra batteries
18. Sunglasses or snow goggles (an extra pair is recommended)
19.Water bottle, preferably wide mouthed, with at least one liter capacity
20. Pocket knife
21.Note book with pens and pencils
22. Plastic bags - small size for books, film etc., larger bags for clothes, sleeping bags
23.Well fitting strong shoes with a couple of woolen socks. The shoes should be used before treks to avoid blisters.
24. First aid set for minor accidents and sickness.
25. A raincoat is necessary to meet uncertainties of weather.
26.Chocolates, lozenges, candies, glucose and dry fruits provide extra pep and energy.
27.It is advisable not to exhaust energy by walking fast, as otherwise the trek will be not enjoyable. 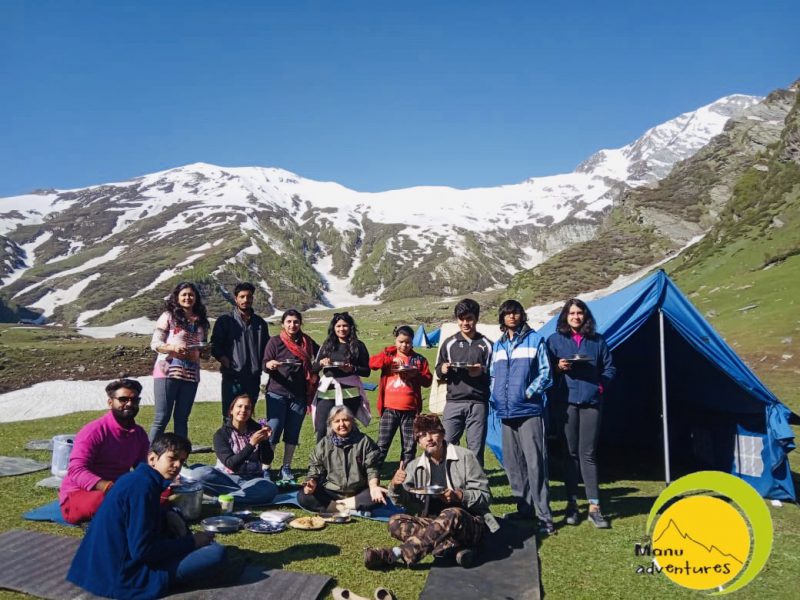